This post is part of Just Ahead’s Yosemite Trip Planner—our guide to what you need to know to plan your trip to Yosemite National Park. Click here to see the complete series. And be sure to download our Just Ahead smartphone audio tour of Yosemite before you head to the park. (Note: Due to a trademark dispute, several Yosemite lodges now bear new names. To avoid confusion, we are using both the traditional names and the new names in the text below.)

Yosemite and vicinity are blessed with lodging that ranges from world-class beauties like the Ahwahnee and Tenaya Lodge to simple tent cabins that provide a more affordable way to sleep in comfort amid the beauty of the park. We cover all of the lodging in Yosemite here, including few outside-the-park options that offer rooms within 10 or so miles of the park boundary. And, of course, we point out all of them in the course of our Just Ahead audio tour of Yosemite. No matter where you’re headed, be sure to make reservations well in advance. Though it’s possible to get lucky, you should never count on it. Ahwahnee Hotel
The Ahwahnee Hotel (now known as the Majestic Yosemite Hotel), is the marquee lodging in Yosemite, if not the entire national park system. Its log-and-stone construction and Native American décor honor the beauty and history of the surroundings. And what majestic surroundings: Floor-to-ceiling windows frame views of Half Dome, Glacier Point, and the Royal Arch Cliffs. Massive sugar-pine beams and dark, ponderosa pine paneling add to the elegant rusticity of the place. The Ahwahnee has 99 rooms and 24 cottages, but its greatness lies in its public spaces—the Great Lounge, dining room, solarium, and bar—and the way its architecture blends in with its backdrop. All of that is testimony to the skill of its architect, Gilbert Stanley Underwood, who also designed lodges in Zion and Bryce Canyon National Parks. Whether or not you choose to stay there, the Ahwahnee is worth a visit—in fact, we’ve included it in our Best of Yosemite listings. Hot tip: The Ahwahnee’s cottages were recently re-done to better reflect their late-1920s vintage. They’re probably the most desirable rooms in the park.

Yosemite Valley Lodge
Yosemite Valley Lodge strikes a compromise between the expensive Ahwahnee and the summer-camp flavor of Curry Village. The location is brilliant—as the name suggests, the sprawling, 245-room lodge is near the base of Lower Yosemite Fall in the heart of Yosemite Valley. With two restaurants, bike rentals, and an activities desk, it’s very busy place, but an ideal home base for exploring all that Yosemite has to offer.

Curry Village and Housekeeping Camp
Opt for Curry Village (now known as Half Dome Village) or nearby Housekeeping Camp if you prefer a great location to a tranquil one, and if you like the vibe of sharing the beauty of Yosemite Valley with hundreds of very close neighbors. They’re not for everyone, but they can be a lot of fun, and they offer the best deals in the valley. The village’s nearly 500 rooms range from thin-walled cabins to unwalled tent cabins. Cooking isn’t permitted in Curry Village, but it does offer several very popular dining options. Housekeeping Camp has 266 tent cabins—very popular with families who like the sense of camping but lack the requisite gear.

White Wolf Lodge
Unsung White Wolf lodge is quiet and secluded, located about a mile off Tioga Road in the heart of Yosemite’s high country. It’s been undergoing renovations, but will reopen in for the summer season in 2016. White Wolf is composed of four cabins, 24 tent cabins and a friendly, intimate dining area—a good thing, because cooking isn’t allowed in the cabins. It’s a fine home base for exploring the high country and for out-the-door day hiking.

Tuolumne Meadows
“Lodge” is a bit of a misnomer here, because this is really a collection of 69 tent cabins set just off Tioga Road at nearly 9,000 feet elevation. The cabins have wood-burning stoves and gas lanterns, but cooking is not allowed. Restrooms and showers are located in the center of the camp. The summer-only lodge also has a central dining tent that provides box lunches upon request. It’s a great home base for exploring the Tuolumne Meadows area and its surrounding high peaks.

Wawona Hotel
The ornate, 104-room Victorian Wawona Hotel (now known as the Big Trees Lodge) harks back to an era of travel when it took eight dusty hours by stagecoach to arrive at this lovely oasis. No, you’re not surrounded by Yosemite Valley, but you can still look out from your covered porch at high peaks and a huge meadow. This is the kind of place where you don’t mind slowing down a bit, enjoying afternoon tea or casual strolls. But you’re still not far from Glacier Point Road and Yosemite Valley. This is also one of the park’s best bargains, especially if you’re willing to forgo an en-suite bathroom. 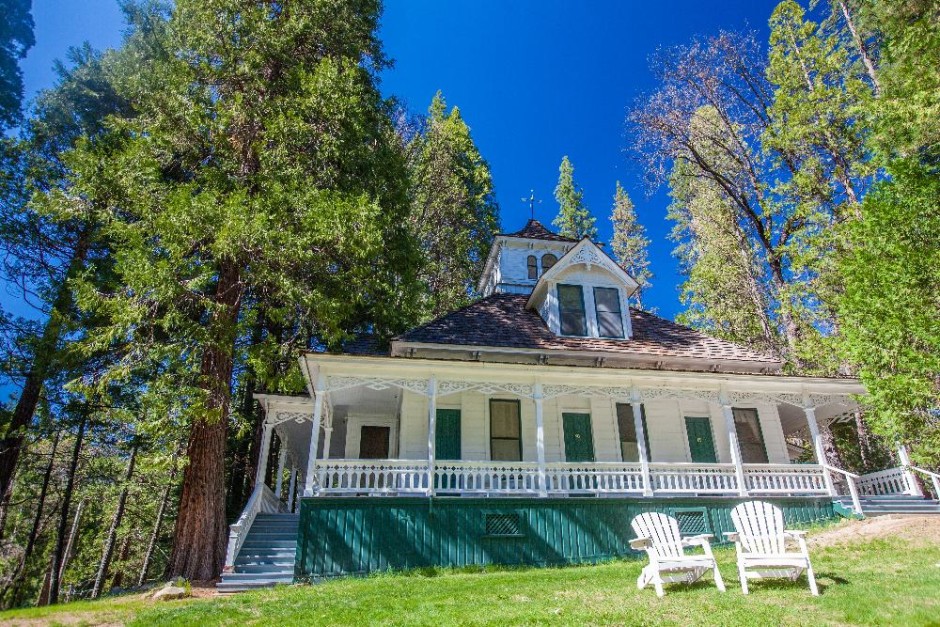 One of the cottages at the Wawona Hotel, now called the Big Trees Lodge. Photo: DNC Parks & Resorts at Yosemite, Inc.

Redwoods in Yosemite and Yosemite West
Yosemite has two areas of private in-holdings where private homes and cabins are rented through centralized reservation services. These are particularly suited to families and extended families who prize being able to cook and entertain. One is called Redwoods in Yosemite, located in the Wawona part of the park. The other is Yosemite West, located near Chinquapin Junction, just off Wawona Road near the start of Glacier Point Road.

Yosemite Area Lodging Outside the Park

Evergreen Lodge
Tucked away in the woods on the road to the Hetch Hetchy part of the park, this historic lodge has tastefully appointed freestanding cedar cabins, good food, a swimming pool, and a very active recreation program that includes guided hikes, fly-fishing, and bicycling. Much of the surrounding area burned in the Rim Fire of 2013, but the grounds adjacent to the lodge were spared. It’s a fine retreat away from the hubbub—eight miles from the park’s Big Oak Flat Entrance and 37 miles from the heart of Yosemite Valley—yet close enough for easy day trips in the park.

Yosemite View Lodge
This 335-room motel stretches alongside the Merced River and State Route 140, about 2.5 miles from the park’s Arch Rock Entrance, and 12 miles from the heart of Yosemite Valley. The rooms are fine, but this lodge’s main function is to accommodate visitors who couldn’t find a place in Yosemite Valley.

Tenaya Lodge
Tenaya Lodge isn’t in Yosemite National Park, but the upscale four-diamond lodge has that timber-and-stone look that makes it feel like park lodging. Located three miles south of the park’s South Entrance, the 302-room lodge has fine dining, a spa, and bike rentals.

As you plan your trip to Yosemite National Park, don’t forget the most useful resource you can bring along—the Just Ahead app loaded with our Yosemite tour. Just Ahead turns your smartphone into an audio tour guide that will guide you to the park and all of its best landmarks, hikes, viewpoints, and side trips. It’s the best way to get the most from your visit. Click here to try Just Ahead for free.